“Cordoba had the edge in dissent,” begins Pakistani writer and commentator Tariq Ali in a section devoted to the one-time intellectual capitol of Al-Andalus, the once Muslim southern half of contemporary Spain that is home to one of the most spectacular works of Islamic architecture, The Mezquita, in his larger post-September 11 work, The Clash of Fundamentalisms: Crusades, Jihads and Modernity. Much has happened in the ever-complicated relationship between mine and Ali’s country in the last week since U.S. Navy Seals raided, killed and then buried at sea Osama bin Laden, who it turns out has spent several of the past fugitive years in an elaborate compound just off Kakul Road, the drive leading to Pakistan’s elite military academy equivalent to Sandhurst in the U.K. or West Point here in the U.S. The compound in Abbottabad, Pakistan was just 40 kilometers from the capital Islamabad. Not even former President and Head of the Pakistani Army Pervez Musharraf received such treatment, although he did assert he had gone jogging in the area in the past. The diplomatic dance has begun with as much precision as the diplomatic duel, much of it not resembling the relationship of cooperation and mutual satisfaction embodied by Cordoba’s golden age, depicted in the center of the National Geographic illustration above of Alexandria, Cordoba, and New York, three cities at the crossroads of the world in their time, from “Tale of Three Cities” published in the magazine around the time of the millennium.

In an intelligence coup, the U.S. Department of Defense has released excerpts without audio of video captured during the raid. One of the video stills shows that the formerly most feared terrorist/heralded Islamic jihadist in the world “looks like a schnook” with a dyed beard during a rehearsal, in the words of one internet commenter on the Bag News Notes site dedicated to analyzing contemporary imagery in mass culture. For those outside New York unacquainted with the Yiddishism, a shnook is someone to be pitied more than feared whose mistaken self-conception, often of grandeur, diverges from the greater reality.

Not sure it fits Osama entirely, although he looks silly – but as Bag News Notes chief writer Michael Shaw points out, so did Obama earlier in the week as he performed a redo of his May Day address to the nation, the effect of which was to say, “We got him!” if not quite in those words. Shaw leans into the Department of Defense (although the Obama press operations would fall on the White House) for not seeing such a strikingly obvious parallel in their image making and image operations:

The effective stuff falling somewhere between this and puppies. In any event, after several failed efforts (including former President George W. Bush’s “Mission Accomplished” speech aboard the U.S.S. Abraham Lincoln aircraft carrier on May 1, 2003), taking down Osama bin Laden on May Day means President Barack Obama took down two enemies with one stone: the communists and the terrorists. May Day is once again safe for democracy, or at the very least the Democrats. It also means that for this year at least, I can no longer refer to the Eurovision Song Contest as “the most important geopolitical event of our time“.

When people took to the streets in celebration in Lafayette Square outside the White House, and Ground Zero formerly the World Trade Center site in lower Manhattan, many different media outlets showed up to dutifully record the fervor as true USA! patriots shouted their three favorite letters: U-S-A! U-S-A! and some clever people had the good idea to play one of my favorite songs, the kitschy jingoistic “Party in the USA!” by an extraordinarily scantily clad and underage Miley Cyrus. In the music video, she appears wearing just a little more than very little in an outfit replete with booty shorts, push up bra, cowboy boots and a big American flag in the backdrop. Yeah, it’s a party in the USA!

Despite most media portrayals of victorious Americans fist pumping with the flag and a Miley Cyrus soundtrack, most Americans my guess is are pretty detached at this point, almost 10 years on from where we started, as was the case when I past through this southern New Jersey rest stop the following day: 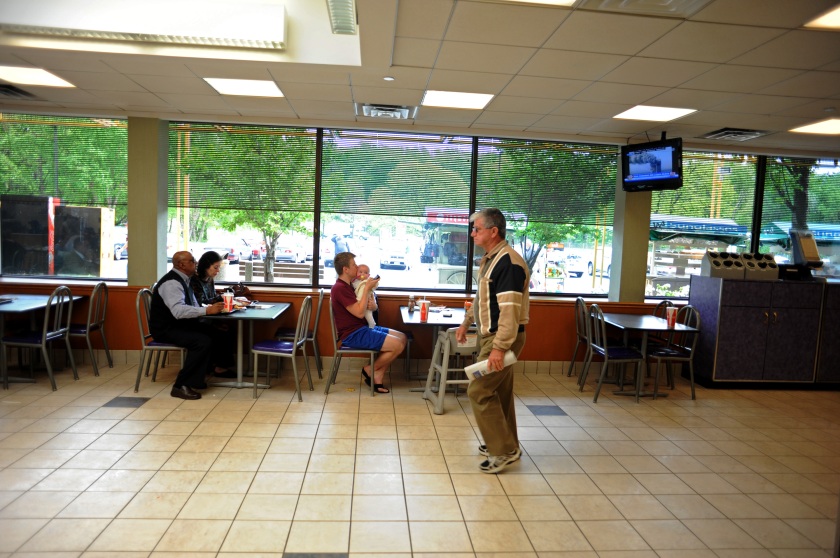 Patrons at the food court at the Walt Whitman rest stop along Interstate-95 in Cherry Hill, New Jersey react to news of Osama bin Laden’s death the morning after American President Barack Obama announced his death at the hands of US Navy Seals in a compound in Abbottabad, Pakistan, less than 1,000 meters from a prominent Pakistani military academy on May 2, 2011.

As the people in the picture above certainly know and know well, these are the times we live in and nobody has to like the modern world, only live in it. Despite the detachment from the events of September 11, the events of that day remain as relevant as ever as one question is carefully avoided both in the American media and among the political and diplomatic elite: did anyone in the Pakistani Army or the Inter-Services Intelligence (ISI) have any foreknowledge of events that transpired on September 11? No one in the American media has said the word Kargil, perhaps in deference to the fact that most Americans would likely not recall the 1999 India-Pakistani nuclear standoff over Kashmir. What role might the resolution at the Blair House Summit [PDF] between Clinton and former Pakistani President Nawaz Sharif (subsequently overthrown by Army Chief Pervez Musharraf after Sharif returned home) have had in the shaming of Pakistan and the desire for a humiliating form of revenge? This is not a question that can or necessarily ever will be answered; in part, the diplomatic dance begs that it not be, but out of such ambiguity lay the future patterns of deception and interpretation. Sometimes asking the question alone is the best one can accept for the moment.

In the aftermath of the death of Osama bin Laden, the diplomatic contortionist’s act between the U.S. and Pakistan has evolved. In the words of one Pakistani analyst, Mosharraf Zaidi:

It is even less likely that, as U.S. counterterrorism czar John Brennan claimed in a press conference today, Pakistani authorities did not know about the military operation that killed bin Laden until it was over. Abbottabad’s Bilal Town neighborhood where bin Laden lived and died was virtually around the corner from the Pakistan Military Academy at Kakul — Pakistan’s West Point, where future General Kayanis and General Pashas are learning to be officers. It doesn’t take 40 minutes to start to scramble planes, or get troops to Abbottabad, and there is no getting into the town by land or air without the expressed consent of Pakistan’s security establishment. This may not have been an official joint operation, but it was almost certainly a collective effort.

Maintaining these two fictions requires a great deal of creativity from both parties involved. In the first instance, Pakistan has to lie to enable the U.S. government to avoid looking like a first-timer in Las Vegas, getting hustled by a pro. In the second, the United States has to lie, to avoid implicating its chief partner in the dishonoring of Pakistani pride and the violation of Pakistani sovereignty.

I do not think this is what the legacy of Cordoba in our time, National Geographic or Tariq Ali had in mind with regard to “the edge in dissent” at the crossroads of the world; preserving an ideal or the very image of utopian peace in our mind requires that we contemplate other possibilities. We must remind ourselves rather of what was, of encounters tinged with idealism and intellectualism. Such historical reflection not only serves to bolster our moral appetite for “The Lies They Tell Us,” as Zaidi’s piece is titled, but courage to continue because thanks to the memory of these earlier civilizations, we can remember that “Islam had always prospered through contact with other traditions,” (except of course when it did not, such as during the Crusades or in the last century after the decline of the Ottoman Empire or Sultan Abdulhamid II forward) in the words of Tariq Ali, as “Its origins lay in close contact with Judaism and Christianity.” From Cordoba, some images:

The exterior of the Mezquita in Cordoba, Spain on July 28, 2007. Cordoba is often cited as a historical model of peaceful coexistence among Christians, Jews and Muslims when the city was the capital of Moorish southern Spain and the Umayyad caliphate for nearly 500 years. Today Cordoba attracts tourists from around the Middle East and North Africa as well as the West because of the city’s shared cultural patrimony. 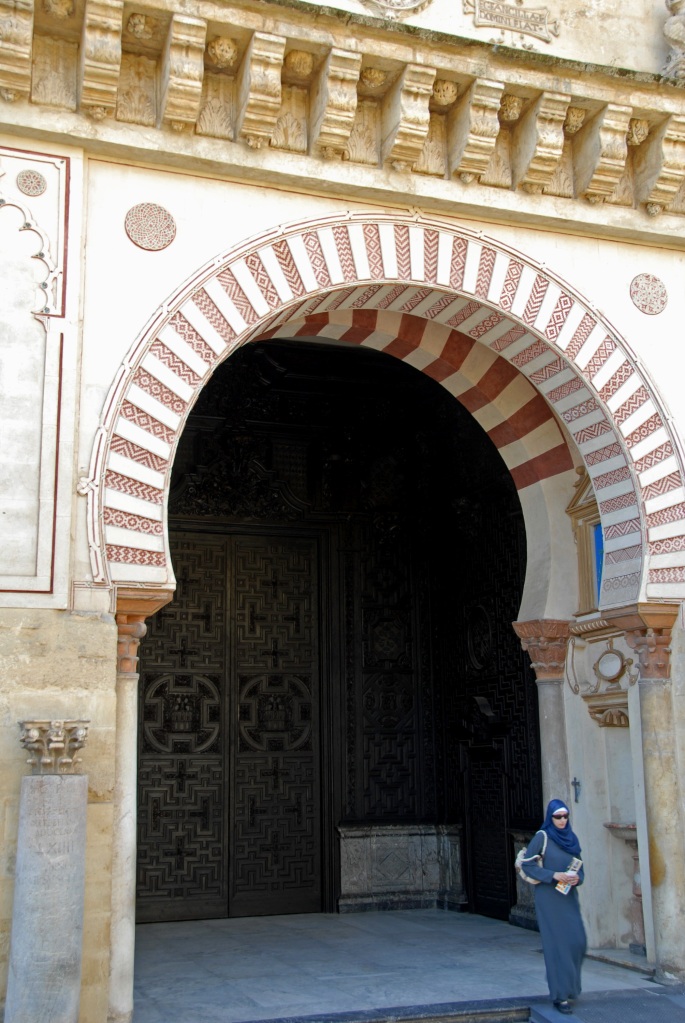 Inside the courtyard of the Mezquita in the heart of the old city in Cordoba, Spain on July 28, 2007. The Mezquita (“mosque” in Spanish) took nearly 200 years to build and was the centerpiece of the capital of Al Andalus, as the region was known during nearly 700 years of Arab rule under the Umayyad caliphate when Jews, Christians and Arabs peacefully coexisted. When Christians seized the city in 1236, the mosque was converted into a cathedral and remains a popular tourist attraction among all three communities. 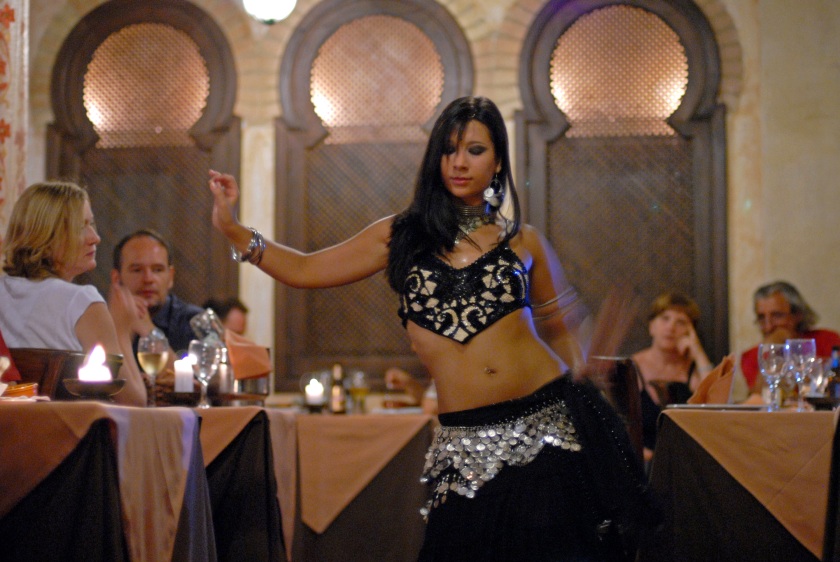 Belen, a Catalan belly dancer who trained in the southern Spanish city of Granada, performs for an audience of mostly tourists at the Arab-themed Hammam Restaurant in the old Jewish quarter of Cordoba, Spain on July 28, 2007.

Locals at the Hammam shisha cafe and Arab-themed restaurant in the old Jewish quarter of Cordoba, the one-time capital of Moorish southern Spain and the Umayyad caliphate, on July 28, 2007. 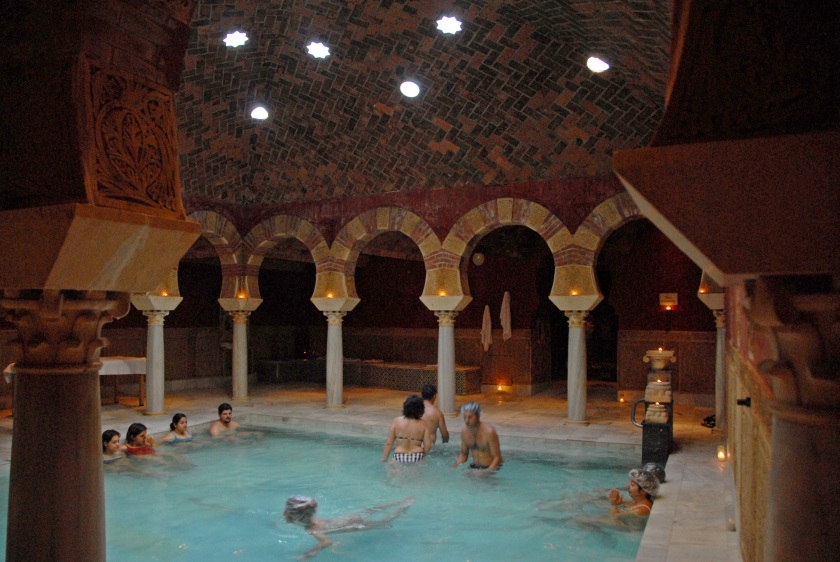 The hot tub at the Arab-themed Hammam Restaurant and Spa in the old Jewish quarter of Cordoba, Spain on July 28, 2007.

The Mezquita in Cordoba, the one-time capital of Moorish southern Spain and the Umayyad caliphate, on the evening of July 28, 2007.