After the Chris Hondros Memorial Service on April 27, 2011 in Brooklyn. It was nice what the priest said, how we do not live unless we live for others.

I am still at a loss for the enormous quantity of injuries to photojournalism in recent months, beginning for this generation with Emilio Morenatti of The Associated Press on August 12, 2009. An Associated Press account of the bomb “planted in the open desert terrain,” according to the American military, left Morenatti without his foot as he traveled in southern Afghanistan near the Pakistani border with AP Television News videographer Andi Jatmiko and a unit of the 5th Stryker Brigade. Again in southern Afghanistan, Joao Silva one of the four founding members of the famous group of South African photographers covering the end of apartheid known as “the Bang Bang club,” was hit by a mine and lost both legs, as reported October 23, 2010 by his employer The New York Times. This spring came the awful and surreal detentions of well known and intrepid New York Times conflict photographers Lynsey Addario and Tyler Hicks alongside reporters Anthony Shadid and Stephen Farrell in Libya. Then obviously and most recently came the tragic deaths a whole bunch of years way too soon of Chris Hondros and Tim Hetherington in Misrata, Libya on April 20, 2011.

There are a few other days in the history of photojournalism that resonate a tragic loss of such magnitude: February 10, 1971 when four photojournalists at work covering the American military intervention in Vietnam, Larry Burrows, Henry Huet, Kent Potter, and Keisaburo Shimamoto, went down over Laos; and May 1954 when Magnum Photo Agency lost Robert Capa and Werner Bischof. There are, of course, and have been many, many others along the way. Ernie Pyle in the Second World War. The list goes on to too many any one with the good sense to wish to keep working in this profession would like to count. It is not glorious or heroic, but sad, frustrating and to those who know those afflicted by the pain and suffering caused by conflict as Chris, Tim and the others on this unfortunate list know, impractical to think you will not be touched eventually by the pain and suffering caused by conflict.

I did not know Chris or Tim nor was I their friend. What I was was something else, a haunted public, a curious admirer, and deeply dedicated to similar principles, not of bang bang, infinite risk until things are terribly, tragically finite, but instead of a need to go where many people will not and tell stories that would otherwise go overlooked. This sounds simple but ask anyone who has tried to make a living at it, it is not. We criticize the media as much as awards are given in recognition of members of the media. There is too much glory in photojournalism. There is not enough glory in photojournalism. What to say? There is no need for heroics when there is much left undone and unsaid and at the end of the day heroics does minimal to shed light on the complex layers of humanity that these two men, just this week gave their lives for.

I met Chris once in late 2007 between time in Iraq when he answered a message I sent after a mutual acquaintance suggested I be in touch. He allowed me for the better part of two hours to ask him a great many questions and be challenged by his thoughts on conflict journalism, at that time, as Iraq was deeply unsettled and the cauldron in Afghanistan had yet to be stirred again. I will not lend deeper meaning to an encounter three and a half years old now at a Brooklyn bar seldom thought about since then; the advice was so good I need not hear it repeated nor think twice about it. Some of the conversation in retrospect appears like a prophetic if not profoundly honest and unofficial welcome to the world of photojournalism. He said do not expect to be in a bubble, the consequences of war are not something that will evade you or your friends and you will lose people along the way. Be sure you know what you want. Know when you think it is time to quit, for the day, for awhile, for when you need to.

I have spent my time since then honoring this gesture the best way I know how, with a gesture at the memory not of him as a person, of which others have a much greater wealth than me, but to the work he gave his life for. I have combed his archives quite literally “tumbling” through them and posting my favorite images, as I find them (“Getty Images” water mark and all) on my photo journal blog, a Tumblr blog I established to keep my creative head about me as I endured a brutal academic semester at Georgetown cramming as much conflict literature and theory of media war reporting and military public affairs management while simultaneously preparing for theoretical comprehensive exams. Sometimes the things that give us life are quite literally also capable of taking it from us.

My friend Temo Bardzimashvili, a Georgian photographer based in Tbilisi who I met last summer after we were introduced by a mutual acquaintance, sent me a link to a series of images he had created that held striking resemblance not to famous images but instead to images by famous photographers that held resonance for him. The blog post entitled “Similarities” came to mind in the days since April 20 as I have continued through the Chris Hondros archive on the Getty site in reverse chronology. This evening I reached a natural breaking point, which like for my friend Temo is “natural” only to me insofar as it is the moment when I held a camera with an eye toward the profession for the first time in early 2007. I have always admired a Chris Hondros image when I have seen one in the paper. In the last few days, I have discovered precisely how much. Some similarities:

TUCSON, AZ – APRIL 06: Bakers measure out freshly-mixed bread dough into portions to prepare for baking at Small Planet Bakery April 6, 2008 in Tucson, Arizona. The cost of staple foods has jumped in the past few years with the price of bread increasing by nearly 30 percent per pound since 2006, according to the Consumer Price Index. A slowing economy combined with continued pricing increases has prompted Americans to be cautious in their consumer spending practices. (Photo by Chris Hondros/Getty Images)

CHICAGO – Robert Yanushpolskiy, the owner of the Argo Georgian Bakery on West Devon Avenue in Chicago, Ill. places baked goods in the oven while Basil Ushveridze, a Georgian immigrant and baker, prepares the dough for traditional Georgian bread on May 7, 2008.

PORT-AU-PRINCE, HAITI – JANUARY 27: Earthquake-displaced Haitians stand by their tents as the sun sets January 27, 2010 in Port-au-Prince, Haiti. Aid groups entreated international donors for tents in the aftermath of the massive earthquake, which has left hundreds of thousands of Haitians homeless. (Photo by Chris Hondros/Getty Images)

HAVANA, CUBA – A cuban woman waits for a friend outside the Linea y L Store in the Vedado neighborhood of Havana, Cuba on March 9, 2010.

RAMBAZI, KANDAHAR PROVINCE – JUNE 06: An Afghan girl runs across the desert as the mountains bordering Kandahar valley loom in the background on June 6, 2010 in Rambazi, a village south of Kandahar, Afghanistan. Soldiers of the 1st Squadron, 71st Cavalry Regiment of the 10th Mountain Division have fanned out in the vast hinterlands south of Kandahar, part of a counterinsurgency strategy aimed at protecting Afghan civilians and legitimizing the government of Afghanistan in the minds of the rural local populace. (Photo by Chris Hondros/Getty Images) 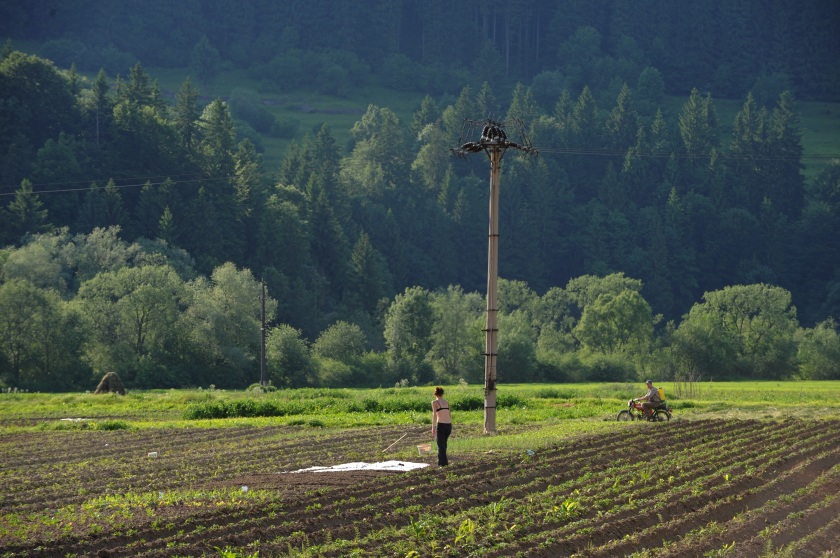 MEDVEDIA PRI TVRDOSINE, SLOVAKIA – A woman tends to her garden late in the afternoon as a passing motorist glances over in Medvedia Pri Tvrdosine, Slovakia on June 8, 2010.

My friend, Finnish photographer Mikko Takkunen is doing a fantastic job of keeping his Photojournalism Links blog updated with an ongoing series of links and tributes to both Hondros and Hetherington at an “In Memoriam” page.

Finally, some praise formy instructors who continue to walk, live and create some of the amazing, searing and beautiful imagery that populates our saturated media world with a little bit of richness who, like Chris Hondros, provided a little bit of light, instruction, advice and an occasional place to live, some editing guidance, and other forms of help and assistance too vast and numerous to name. For those who will invariably criticize the amount of attention lavished upon men once they were gone, here is a little praise and a song for those who have done this work, continue to do this work and have helped build up another generation to come after along the way. You know who you are; let’s celebrate the life and work of Chris and Tim now, however.