I so seldom have occasion to comment on commenting on official comments. Today is an exception. Inspired by Bob Dylan’s very simple yet eloquent statement that “When something is not right, it’s wrong,” I did something I never do. I commented on a news article, “Updated: Northwestern explains Protess decision, accuses professor of lying, doctoring emails,” in the online comments section. When something is not right, it’s wrong.

For the past several months, Northwestern University Medill School of Journalism professor David Protess and the university have triangulated the blame over a series of accusations made as the result of a subpoena against the professor and the program by the State’s Attorney Anita Alvarez. Alvarez charges Protess bolstered students’ grades if their reporting on Anthony McKinney, accused and convicted of killing a security guard in Harvey, Illinois in 1978, revealed prosecutors’ misconduct and reversed his conviction. Later, charges surfaced as well of withholding documents from her office. Among other things, Alvarez sought student grades and notes, otherwise and previously fully protected under an Illinois “reporter shield” law. But the strength of the law, like most things, is only as great as its performance under stress. The tests do not count; this is the real thing.

The relationship or natural instincts when someone perceives to be under legal assault from the state is to wish to withhold as much as possible; similarly, those acting on behalf of the state will want to obtain as much information as possible to assist in building a successful case. These tensions are natural, normal even. In this case, I believe both Protess and Alvarez are in fact acting in a way they each find to be honorable, moral even.

Let me be forthcoming. I have known Protess my entire life and more than anything about him, I have long appreciated and learned from his keen understanding of two of the most important layers of American society – the media and the judicial system. He has been successful because of his skill and agility in a third, academia, and has always been motivated to work within the system to better the system itself rather than outside it or above it in an effort to subvert it. The latter serves selfish means, individual power, whereas the former strengthens the protections of all individuals within and under the system. What we have might be broken, but it is not bad. It is the house that human intentions built, so therefore it is imperfect. Protess appreciates and has acknowledged a few along the way.

Today, the mud between Northwestern and its former star feels somewhat dirtier. By dirtier, I do mean more public and with one side standing down as the other throws an enormous hunk. The university claims:

In the days after Northwestern officials removed Medill Prof. David Protess as the professor of his popular Investigative Journalism course last month, members of the NU community demanded an explanation.

The University delivered one Wednesday, accusing the 29-year professor of lying and doctoring emails to avoid turning over documents to prosecutors who had accused Protess and his students of crossing ethical boundaries in investigating the murder conviction of Anthony McKinney.

“In sum, Protess knowingly misrepresented the facts and his actions to the University, its attorneys and the dean of Medill on many documented occasions,” University spokesman Al Cubbage wrote in a statement distributed after a Medill faculty meeting in which University Provost Dan Linzer and Medill Dean John Lavine released the findings of a review of the high-profile professor.

The five-month review, which centered on examinations of the hard drives of Protess’s work and private computers, “uncovered considerable evidence” of misleading and altered e-mail messages, according to Cubbage’s statement.

Protess, the founder of the Medill Innocence Project, called the statement “blatantly false” and “malicious.” If he made any misleading statements, Protess said, it was because attorneys asked him to remember specific emails sent five years earlier and while his wife was undergoing treatment for breast cancer. He added that misunderstandings were exacerbated by the “imprecise” nature of email communication.

Protess accused the University of “scapegoating” him to protect its reputation and cover up missteps by other officials attempting to respond to the a [sic] subpoena about the Medill Innocence Project’s three-year investigation of the McKinney case.

“The truth of the matter is that there is a lot of blame to go around here, and I share it…but as in all complicated situations involving Northwestern University, when there is negative media attention, typically one person is assigned blame,” said Protess, referring in part to a February controversy over a sex-toy demonstration in psychology Prof. John Michael Bailey’s Human Sexuality class. “No matter how loyal I am, they will be disloyal to me as soon as things don’t go right public relations-wise.”

And now for the most shameful part of this whole affair, I write in the comments section of The Daily Northwestern article my comment on the official comment:

The fact is the Innocence Project and Protess’ investigations and his students have turned up cases where everything went wrong and the right man is still behind bars. In the face of a really malicious assault on him and his credibility, Protess has stood up by admitting fault when and where he has been wrong, protecting those around him, and rising to the occasion with real dignity and respect for an institution that has shown much less in return recently. The strength of an individual can however though only be as strong as the institution’s [sic] behind him, and in this case it is Medill not Protess that has come up short. Faculty sabbatical requests in the wake of Medill’s handling of this matter will no doubt measure the real climate at Medill and the confidence faculty have in an institution that at its best (or most utilitarian) is in some fashion responsible for upholding civilian values as a guardian and in its watch dog capacity as the Fourth Estate.

Heavy stuff at stake here, far more than just a man and his reputation, a school and its reputation, a prosecutor and her reputation. Kissinger once said that in academia the competition was so fierce because the stakes were so low. Michael Miner of The Chicago Reader reminds us not only of why independent weeklies still matter but why this case in particular does despite “Recent breathless headlines—Northwestern accuses Protess, strips Protess of class; Protess takes leave, plans independent program“. Miner is right about a larger point. We “shouldn’t turn our eye from what matters most here,” namely “the wretchedly compromised fate of Anthony McKinney.”

“‘About the Most Airtight Case of Innocence’: How a legal storm capsized a petition to free a man who’s been imprisoned for three decades,” Michael Miner for The Chicago Reader.

And lastly, better days shining through: an image of Protess hugging Anthony Porter on his release from prison in 1999 after serving more than 16 years on death row for a 1982 double murder conviction, a crime he did not commit. 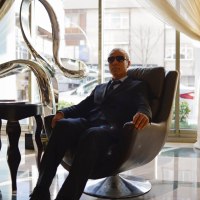